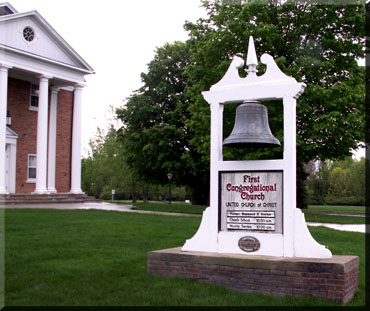 The bell of the First Congregational Church has always been, and likely will continue to be a motivating force in the life of our church. To many people it is now a dynamic symbol of the heritage that is ours. It recalls to each of us the great contributions made by our members who have gone on before us; who built and have left to us a living church organization which is beneficial to all of us. It is the greatest single tie between the past and the present for it is a central theme all through the history of our church. Born in controversy, it has watched over the difficult times of our early church. It is as though it were a watchdog holding our people together, when it would have been so easy to have given up. Its own history is a stormy one, but it survived each difficulty, and today hangs silent at the approach to our church, a tribute to the past and a warning to our future. It is not hard to imagine that it would spring into action again if the foundations of our church were threatened. It has never had a quiet history. The eight hundred pound bell was purchased in 1894 as a joint venture between the members of the church and the city. It was used by the city as a fire alarm. The drive was sparked by Henry McCarty, Joseph Lockwood, and A.T. Pearson, businessmen who were also associated with our church. Hung in the belfry of the first church at the corner of North Division and East Dayton Streets, the bell could be rung by anyone as it performed the double duty of calling people to worship or firemen to service.
It had to be stored when the second church was erected at the corner of North Merchant and East Dayton in 1911. For some reason the bell loft was not constructed with sufficient strength to hold the big bell. It was pressed into service to toll lustily from a truck in the November 11, 1918 victory parade. Used as an emergency fire bell when the Fremont Community Building was built, it was again stored away when it proved too heavy for the roof of that new building. Stolen in 1930, it was recovered in a Muskegon junkyard by Police Chief Amos Bacon, and again stored. However, in the 1940s a number of people of our church were determined that it be restored to use. Following much discussion, the steeple area was finally rebuilt to support the heavy bell. There it hung until the church was sold in 1962.
In its new home outside the present church, the bell no longer tolls, but provides quiet evidence of one hundred thirty five years of church history. It also says to our members, "Remember my past history. Continue to give service to this church, following the noble heritage of past generations." Though silent, it says to each one who passes, in the words of Dag Hammerskjold, "You have not done enough, you have never done enough so long as it is possible you have something of value to contribute."